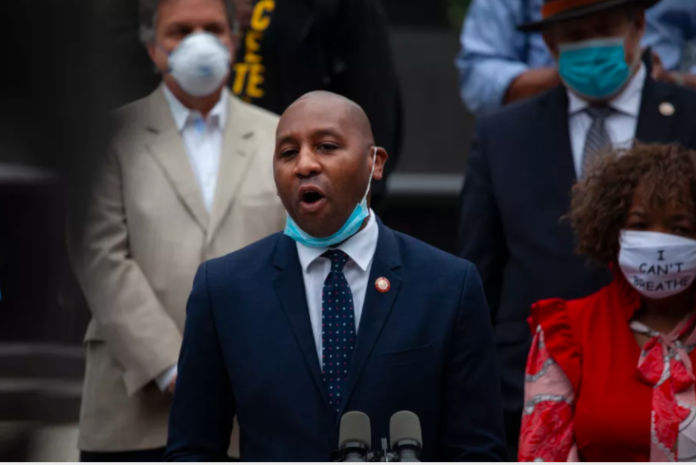 Reacting to imminent budget cuts at the agency charged with investigating police misconduct, the head of the City Council’s public safety committee is pressing for accountability.

Councilmember Donovan Richards (D-Queens) told THE CITY on Thursday he “won’t rule out public hearings” on the Mayor Bill de Blasio’s demand for spending reductions at the Civilian Complaint Review Board.

The board is grappling with a deluge of complaints filed against police officers during protests spurred by the police killing of George Floyd in Minneapolis, in addition to thousands of other cases on its docket.

“Sometimes I feel like I’m living in an alternative universe,” Richards said. “Because during this moment in history when we’re talking about building trust, that all starts with accountability and the reason people are marching in the streets is because of a lack of accountability.”

The agency’s $19 million budget covers 251 full-time positions, city budget records show, including an investigation division of 131. It oversees the $5.2 billion, 35,000-plus officer NYPD.

During a Wednesday board meeting, Chairperson Fred Davie said that the CCRB would have to find $726,000 in staffing reductions if the state Legislature or federal government didn’t provide “immediate financial assistance.”

The staff shrinkage comes on top of the $750,000 in “savings” the de Blasio administration is requesting the agency find over a two year period, a blow to what Davie described as an “already threadbare budget.”

Meanwhile, following protesters’ demands to “defund the NYPD,” de Blasio has so far allowed the police force to avoid cutting staff, aside from retirements and resignations.

On a Thursday morning call with reporters, de Blasio declined to detail any specific NYPD layoffs, even as his budget office is demanding steep cuts across city government in response to plummeting tax revenue.

“Every agency will have to come up with savings,” the mayor said.

Asked for clarification as to whether the NYPD will face layoffs, as is being requested of other city agencies, de Blasio spokesman Bill Neidhardt said the NYPD “will face personnel savings. As will every single agency.”

Elected officials decried the imbalance — noting that voters last year passed a city charter change that pegs the size of the CCRB to the number of uniformed officers it watchdogs.

A spokesperson for Public Advocate Jumaane Williams, Leticia Theodore-Greene, chided de Blasio, calling the cuts “emblematic of the mayor’s failure to meet this moment or to hold law enforcement accountable.” She added: “He’s cutting the very entity in place to hold the NYPD accountable.”

Richards called the roughly 8% cut to the oversight agency’s budget “shameful,” adding that it “guts everything envisioned by then-Mayor David Dinkins.”

Dinkins, New York’s first Black mayor, helped reorganize the CCRB as an independent civilian agency in the early 1990s, Richards noted. “We don’t need less. We need to make sure that the CCRB has every tool at its disposal,” he added.

The cuts come just as the CCRB begins to shoulder a new responsibility: releasing files related to its investigations and findings, following the recent repeal of a decades-old law that shielded law enforcement personnel records from public view. On Tuesday, a federal judge will hear arguments from uniformed officer unions that sued to halt the release of most of the records the CCRB holds and have secured a temporary freeze.

During the 2019 fiscal year, the agency spent $14.8 million on employee salaries, including about half a million dollars in overtime, payroll records indicate.

Salaries at the CCRB range from the mid-five figures for investigators, many of them recent college graduates, up to nearly $200,000 for top deputies.

In a statement to THE CITY, the CCRB chair expressed regret that the proposed cuts coincide with a surge of public interest in police accountability following the Floyd protests.

“I am disappointed that at a time when many New Yorkers are putting renewed faith in the CCRB, our agency is being called upon to sacrifice personnel who are dedicated to making our City a fairer place to live,” Davie said in an email.