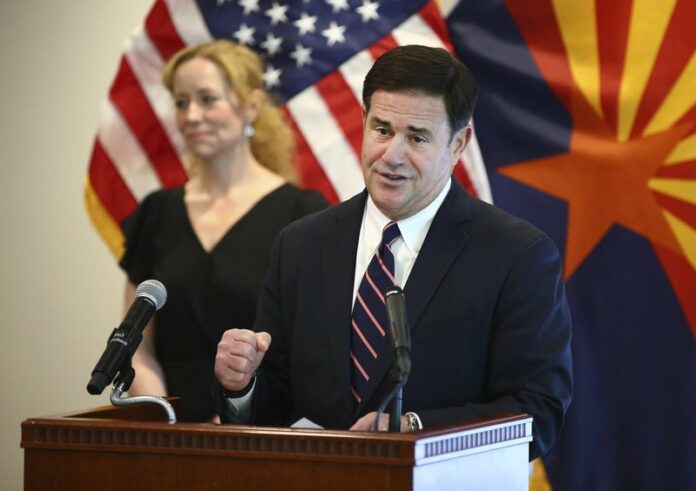 Campaign finance reports summarizing the money raised and spent by Arizona political committees during 2017 show more than $1 million in contributions that have been double reported because of how money raised by Gov. Doug Ducey’s joint fundraising committee has been reported.

The same transactions also highlight arguments made by a group of litigants who have challenged the 2016 campaign finance overhaul, which the plaintiffs say allows circumvention of individual contribution limits.

On Sept. 13, 2017, Tucson real estate developer Donald Diamond wrote a $5,000 check to the Ducey Victory Fund Committee, a Political Action Committee (PAC) or “outside spending group” established by allies of the governor to help him win re-election this year. The committee serves as a joint fundraising committee for both Ducey’s campaign and the Arizona Republican Party.

The Arizona Secretary of State’s new campaign finance website, SeeTheMoney.az.gov, makes it easier than ever to search for the totality of an individual’s contributions, so any interested member of the public can search for Diamond, or anyone else, to see which political committees they’ve given money to. The website shows Diamond made two separate contributions of $5,000 each: the first to Ducey Victory Fund Committee and the second to Ducey For Governor.

Except Diamond didn’t write two checks for a total of $10,000. He wrote only one check, for $5,000. And his contribution isn’t the only contribution counted twice.

The double counted individual contributions mean the Secretary of State’s new website, which cost Arizona taxpayers more than one million dollars, shows the public inaccurate information about the total amount of money contributed by any individual to Gov. Ducey’s joint fundraising efforts of the past year, and miscounts the total amount of fundraising that took place in 2017.

Joint fundraising committees are common in federal elections, but are rarely, if ever, used in state elections in Arizona.

Arizona Revised Statute 16-911 explains that “transfers between committees to reimburse expenses and distribute monies raised through a joint fund-raising effort… are not contributions,” and thus shouldn’t be reported as though the contributor gave money directly to the candidate.

But J.P. Twist, a spokesman for the Ducey For Governor committee, said he believes reporting the transfer from the joint fundraising committee to Ducey’s candidate campaign committee as individual contributions goes “above and beyond” what the law requires.

“We elected, after consultation with the (Secretary of State’s Office), to over share,” Twist said in an email. “We wanted folks to be able to see the individual donors in our reports without having to go find the DVF (Ducey Victory Fund Committee) reports to find its contributors. Sure, we could have just listed it as a net transfer, but we opted to go a step further.”

He said the goal was maximum disclosure, because Ducey For Governor’s compliance with the individual contribution limit of $5,100 to a statewide candidate can be observed in the reports.

For instance, Arte Moreno, the owner of the Los Angeles Angels, and his wife, Carole, each wrote $25,000 checks – for a total of $50,000 – to Ducey Victory Fund Committee on October 4, 2017. Ducey For Governor reported that the couple each wrote a $5,100 check to the candidate committee on the same day.

The Ducey Victory Fund Committee transferred the money to Ducey For Governor, which means the Morenos’ $50,000 in contributions are inaccurately counted as $60,200.

The remaining $39,800 from the Morenos was transferred from Ducey Victory Fund Committee to the Arizona Republican Party. The Arizona Republican Party, similar to the Ducey For Governor committee, reported the money as a “contribution from a PAC” instead of a “transfer in,” which means it also is double counted toward overall contributions made between the two entities. If someone uses the SeeTheMoney.az.gov website to view the total amount of contributions made in 2017, the Morenos alone account for $100,000 when they only gave $50,000.

The transfer to the party also highlights another issue critics of the 2016 rewrite of the state’s campaign finance laws, known as SB1516, have raised: The new laws allow state parties to run coordinated campaigns with the parties’ nominees.

In the case of the Morenos, the couple gave $50,000, and the individual contribution limit of $5,100 was abided when the Ducey Victory Fund Committee transferred money to Ducey For Governor. The remainder went to the Arizona Republican Party, which can take unlimited amounts from any individual, corporation, PAC or union.

The plaintiff’s lawsuit makes the argument that, if Ducey For Governor and Arizona Republican Party then coordinate the spending of the Morenos’ money, which is now expressly permitted by provisions of SB1516, then the individual contribution limit is rendered meaningless and the Ducey For Governor campaign will be able to direct the totality of its spending, as though it had all been received by the candidate campaign committee.

James Barton, the attorney representing the plaintiffs in the case, said the new law practically provides a way for coordinated expenditures of unlimited contributions.

Secretary of State Michele Reagan’s spokesman Matt Roberts said their office believes the new law does not create a way around individual limits.

“(It) does not facilitate any circumvention,” Roberts said. “The only limitation is the temporary campaign finance reporting capabilities for the public, (this will be upgraded soon) but from a legal perspective, everything is fully reported just like under prior law.”

This article was published at Ducey campaign double reports $1.1 million in contributions.