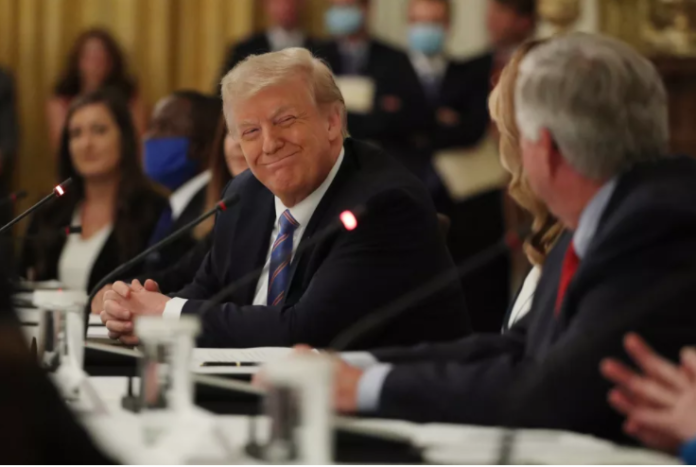 President Trump and Education Secretary Betsy DeVos are continuing their aggressive push for schools across the country to offer in-person instruction five days a week this fall, raising threats of unspecified financial sanctions for those that don’t comply.

Trump tweeted Wednesday morning that he “may cut off funding” for schools if they don’t fully re-open. DeVos broached the issue as well in an appearance Tuesday night on Tucker Carlson’s Fox News show, though she was more circumspect.

“That’s definitely something to be looked at,” DeVos said, before noting that the vast majority of education dollars come from state and local sources.

The comments mark an escalation of the administration’s efforts to pressure schools to open to all students every day, a move they say would be good for students and for the economy. They could carry extra weight right now, as school budgets are under stress because of the coronavirus pandemic’s effect on state budgets.

Indeed, in a coronavirus briefing held mid-day Wednesday, Vice President Mike Pence suggested that the administration could leverage the next round of federal coronavirus relief. “As we work with Congress on the next round of state support, we’re going to be looking for ways to give states a strong incentive and an encouragement to get kids back to school,” he said.

Schools are looking to the federal government to fill gaps in state and local funding and cover new costs connected to the pandemic, and that relief legislation could theoretically condition additional funds on specific reopening plans.

Meanwhile, Trump and DeVos downplayed public health concerns connected to opening up schools, despite rising national case numbers. Trump tweeted that he disagreed with the Centers for Disease Control and Prevention — part of his own administration — which has issued guidance for schools around social distancing and school hygiene. “They are asking schools to do very impractical things. I will be meeting with them!!!” Trump wrote.

Some have blasted the administration’s sparse attention to the public health questions schools are facing.

“The White House and the CDC have offered at best conflicting guidance for school reopening,” several prominent education groups, including the National Parent Teacher Association and the country’s two largest teachers unions, said in a statement. “Without a comprehensive plan that includes federal resources to provide for the safety of our students and educators … we could be putting students, their families, and educators in danger.”

School districts across the country have made varying plans of how to resume instruction in the fall. Some, like Denver, say students will return every day. Many others plan to have each student in school buildings only a few days a week, and some districts will allow parents to choose from a menu of different combinations.

DeVos claimed that any resistance to a full reopening was based on self interest. “There is no excuse for schools not to reopen again,” she told Carlson. “This is more an issue of adults who are more interested in their own issues than they are about serving their students.”

The threat to withhold funding contradicts DeVos’s long-standing argument that the education decisions should be made at the state and local level. An education department spokesperson did not immediately respond to a request for comment.

Many teachers, including those who are older or have preexisting health conditions, have said they are concerned about returning in person. In New York City, where officials announced Wednesday that most students would return to buildings two or three days a week this fall, dozens of school staff died from COVID-19.

Polling data offers a nuanced picture of parents’ desires for the year ahead. Many want schools to reopen in person but they also worry about sending their kids back to school before the virus is fully under control.

The administration has pointed to the recent recommendations from the American Academy of Pediatrics to support its position. The group argues that “policy considerations for the coming school year should start with a goal of having students physically present in school,” but also suggests that reopening should depend on local context and spread of the coronavirus — a less categorical stance than Trump’s.

“It is critically important to develop strategies that can be revised and adapted depending on the level of viral transmission in the school and throughout the community,” the group said. It also suggests that school staff and students use face coverings or enforce physical distancing to the extent possible while in schools.

The Article was originally published on Trump administration says it plans to use financial pressure to push schools to reopen buildings.