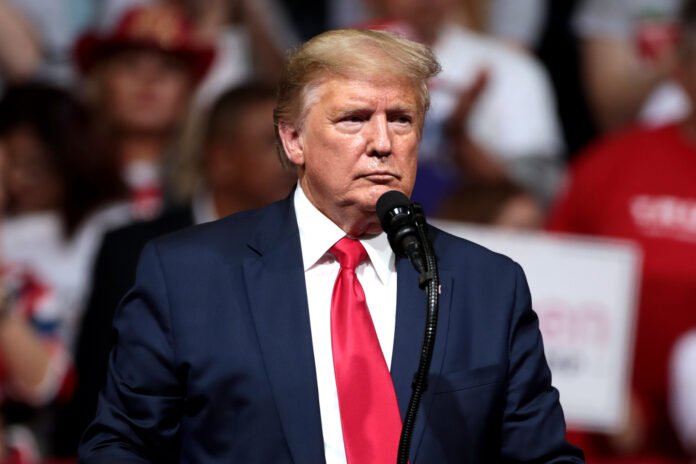 President Trump’s senior aides acknowledged on Tuesday that they are providing less financial assistance for the unemployed than the president initially advertised amid mounting blowback from state officials of both parties.

On Saturday, Trump approved an executive action that he claimed would provide an additional $400 per week in expanded unemployment benefits for Americans who have lost their jobs during the pandemic.

By Tuesday, senior White House officials were saying publicly that the maneuver only guarantees an extra $300 per week for unemployed Americans — with states not required to add anything to their existing state benefit programs to qualify for the federal benefit.

The clarification came as the odds of a bipartisan stimulus package grew increasingly dim and state leaders clamored for the White House and Congress to approve new legislation that would more directly address the expiration of unemployment benefits.

The president and his senior advisers have expressed optimism that the economy does not need an additional package following the White House’s executive maneuvers. White House Chief of Staff Mark Meadows — the president’s emissary in negotiations with congressional Democrats — left Washington this week for an unspecified amount of time.

White House officials are privately studying other options for approving economic boosts without a deal with Congress, according to two people aware of internal conversations granted anonymity to discuss private conversations. For example, they are exploring whether more money could be repurposed for emergency pandemic relief.

But signs also have continued to mount that the White House’s willingness to go it alone may prove unsustainable. States have expressed frustration over the practicality of the president’s new unemployment aid plan because the White House initially suggested states would have to contribute more money even though many are facing major budget shortfalls. The president’s favorite economic indicator — the stock market — began to slide Tuesday amid growing evidence an additional aid package was not on the way.

The tech-heavy Nasdaq, which had been trading near record territory, slid 186 points, or 1.7%.

“The White House’s credibility is on the line here in terms of their ability to execute the stimulus they announced over the weekend,” said Chris Rupkey, chief financial economist at MUFG Union Bank. “And the stock market is telling you here that whatever they’ve announced is not enough — more money is needed to keep the economy recovering.”

Speaking on Saturday in Bedminster, New Jersey, Trump said he would repurpose unspent funding from the Federal Emergency Management Agency to provide enhanced unemployment benefits to tens of millions of Americans. Congress previously provided $600 per week for every person on unemployment, but that program expired at the end of July.

“$400. Okay? So, that’s generous, but we want to take care of our people,” the president said. “Under this plan, states will be able to offer greater benefits if they so choose, and the federal government will cover 75% of the cost. So we’re all set up. It’s $400 per week.”

The Saturday directive from the White House said that 75% of the new benefit would be paid for by the federal government. That was interpreted by many states to mean that they would have to provide an additional $100 per week for their residents to qualify for the benefit.

On Tuesday, White House National Economic Council Director Larry Kudlow suggested adjustments had been made to that plan and that no new money is required from the states for their residents to qualify for the $300.

“We modified slightly the mechanics of the deal,” Kudlow told Fox News.

The White House guidance means all states will likely be able to implement the program without spending new money on aid. It also means people on unemployment will see their benefit effectively cut from $600 to $300 — a 50% reduction — rather than from $600 to $400.

The clarification came after state leaders from New York, New Jersey, Arkansas, Minnesota and elsewhere raised concerns about their ability to pay for the benefit. Other states have expressed concern about their ability to set up the benefit. In Pennsylvania, for example, the state’s Department of Labor under Democratic Gov. Tom Wolf warned Tuesday they would have to start “from scratch” to implement the president’s order. Similar technical hiccups plagued the nation’s unemployed workers at the beginning of the coronavirus outbreak, so another round of troubles could once again leave Americans without the cash they say they need as their bills come due.

“This is not something that any state will be able to do quickly,” said Penny Ickes, a spokeswoman for the Pennsylvania labor agency.

Asa Hutchinson, the Republican governor of Arkansas, said his state had set aside $200 million of its allocation just in case the pandemic worsened in the fall and winter. “We would have to adjust that completely,” he said in response to Trump’s order.

“If we knew that this was a short-term fix, and we could plug the hole and get the money to those who are struggling, we would want to do that,” he said in an interview. “But we would hope Congress would finally get a resolution and be able to replenish that money to the states.”

Governors’ offices and labor agencies in Colorado, Georgia, Louisiana, Maryland, Michigan and Oklahoma said in recent days they are awaiting federal guidance before they make a determination about their benefits.

Treasury Secretary Steven Mnuchin has said the orders would be swiftly implemented.

“Within the next week or two, we think the states will be able to execute,” he told reporters.

Under Trump’s directive, the federal government may only have enough money to pay the enhanced $300 benefits for about five weeks. After that, it would be up to states entirely to cover perhaps billions of dollars in unemployment aid using their own coffers, creating a financial headache for those that are anticipating multi-billion dollar budget shortfalls as a result of the pandemic. To do so, some states’ legislatures — including those that may not currently be in session — also may need to intervene just to authorize new spending or reapportion existing federal dollars to unemployment.

“States are going broke and millions of Americans are unemployed, yet the solution calls for states to create a new program we can’t afford to begin with and don’t know how to administer because of this uncertainty,” said Phil Murphy, the governor of New Jersey, at a press briefing this week.

On Capitol Hill, there was little evidence that talks on a new relief bill would come back to life to relieve pressure on local governments.

Senate Majority Leader Mitch McConnell, R-Ky., nominally kept the Senate in session this week — instead of going on August recess as planned — in hopes of voting on coronavirus legislation.

The Capitol was mostly empty of lawmakers. Instead, for the second day in a row, McConnell and Senate Minority Leader Charles E. Schumer, D-N.Y., delivered floor speeches to a largely empty chamber blaming each other for the state of affairs.

“Democrats are willing to compromise,” Schumer said. “Republicans are being intransigent, and will not move from their position, which is totally inadequate for the needs of America at the greatest economic crisis we have had in 75 years and the greatest health crisis in a hundred.”

After lashing out at Democrats in his own floor speech, McConnell told a small group of reporters about a conference call he and fellow Republican senators had held with Treasury Secretary Steven Mnuchin and White House chief of staff Mark Meadows.

McConnell said in an interview with Fox News Channel that he was also not aware of communications between Mnuchin, Meadows and the Democrats.

“We’re waiting for the Democrats to indicate some interest in getting an outcome,” McConnell said. “There’s a sense of urgency that the American people need us to address the situation. And so I think it’s high time the Democrats indicated they were willing to talk rather than continuing to insist on things, for example, like tax breaks for rich people in blue states.”

Trump administration says it plans to use financial pressure to push...

City Bid to Borrow Billions Could Lead to Renewed Power for...