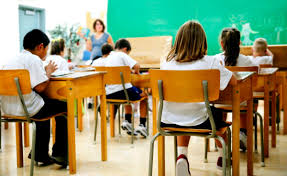 Just as the New Mexico Legislature passes a new budget that will cut 0.6 percent out of the school budget for the next fiscal year, a newly released report shows that New Mexico is, again, at the bottom for child well being.

The Annie E. Casey Foundation, a private philanthropic organization focused on children, released its annual report this week on child well being and ranked New Mexico as 50th in the nation. James Jimenez, executive director for the nonprofit New Mexico Voices for Children, said New Mexico has ranked near the bottom for “a very long time,” but came to the lowest ranking in 2013 and has been there “for a few years.”

“It’s a reflection of the fact that despite what people say, that kids are our most precious asset, it’s not true in the way we invest our money in state and local government,” Jimenez said.

Last week the state passed a revised state budget for fiscal year 2020-2021 that will cut 0.6 percent from the school budget despite cries from some school superintendents and advocates that this will be detrimental and will put the state in a position where it cannot live up to the requirements of the Yazzie-Martinez lawsuit, which said the state did not provide adequate education for students.Gov. Michelle Lujan Grisham is expected to sign the solvency budget, though she can veto by line-item.

Even if teachers and staff receive the full 1 percent, they will only see enough additional money in their paychecks to cover increased payroll deductions for benefits, Goodmacher said.

If school districts do want to offer 1 percent pay raises, there is no new funding to provide the money, so if they wish to give the full raises, districts would be forced to make cuts elsewhere, Goodmacher said in an email.

Most of the new programs the state planned to put into place this year to try to address the Yazzie-Martinez case, such as an extended learning program for Native students and small schools or a culturally and linguistically relevant education, could be scrapped because of unaddressed holes left in the revised budget, according to Goodmacher.

The state is also relying on federal dollars through the CARES Act to help shore up the budget. But it’s unclear how much flexibility the federal government will give to the use of that money and much of it has already been spent by the districts.

The schools will also incur additional costs because of the pandemic. School districts will have to buy their own personal protective equipment, which has gone up in cost. Things like new plexiglass barriers will also cost money as do extra cleaning supplies.

The state has moved to dismiss the Yazzie-Martinez lawsuit. Goodmacher told NM Political Report that the Public Education Department wouldn’t have made that move without Gov. Michelle Lujan Grisham’s consent.

Lujan Grisham said in 2018, while on the campaign trail, that she would not appeal the court case that found that the state is violating its own constitution by not providing an equitable education to its Native students, English language learners, differently abled students and low income children. Former Gov. Susana Martinez signaled that she intended to appeal before she left office. But Lujan Grisham accepted the court’s decision.

Lujan Grisham’s press secretary, Nora Meyers Sackett said in an email that “the governor…has always been clear that the investments we need to make and the change we need to see take place in New Mexico’s public education system will take years.”

“The governor’s administration is committed to those necessary changes and has made the largest and most meaningful investments in public education in decades, from exponentially boosting the at-risk index to raises for educators and everything in between. ​Sweeping and transformational progress takes time, and the governor has not yielded in her unwavering commitment to as much. But an educational transformation should be overseen by the education professionals of the Public Education Department and the state Legislature, not a court,” she wrote.

Goodmacher said dismissing the case “for what it means for New Mexico students, it’s not a pretty picture.”

Referring to a prior Lujan Grisham’s speech when the state, flush with an oil and gas revenue surplus, was providing a “moonshot” to New Mexico’s children, Jimenez said “the politicians talk about an educational moon shot. They don’t have fuel for the rocket. It takes years of policy reform and patience to see it implemented across a diverse and geographically large state.”

The state’s PED announced this week its phased approach for the 2020-2021 school year, which will begin August 3 with a “hybrid model” of some learning taking place in the classroom and some learning happening remotely.

But there has already been some learning loss, Goodmacher said. Not all students have connectivity or devices for online learning. The education gap will only get worse, he said.

“Even with students who are in the best situation, households not directly impacted (by the pandemic), where the parents have time to help kids with homework, are not going to learn anywhere near as much as in a normal year,” Goodmacher said.

The Kids Count Data Book also found that more than half – 56 percent – of the state’s three- and four-year olds are not in preschool.

Save the Children ranked New Mexico as having the highest number of students who do not graduate on time – at 28.9 percent – and found that about a quarter suffer food insecurity.

Goodmacher said the learning loss and the educational inequities will only become more glaring.

“The difference between the haves and the have nots between students will be worse,” he said.

Both Goodmacher and Jimenez said students are going to need additional aid, in the form of counselors and social workers, in the upcoming year to help them with the emotional stress from loss of school, trying to learn from home, and the stress the pandemic has wrought on their households.

Goodmacher said that if the legislature eliminated tax cuts to the wealthiest New Mexicans made under Gov. Bill Richardson and corporate tax cuts made under Gov. Susana Martinez were to be repealed, the state could realize about $750 million additional dollars.

The article was published at School budget cuts could be worse than thought, advocates say