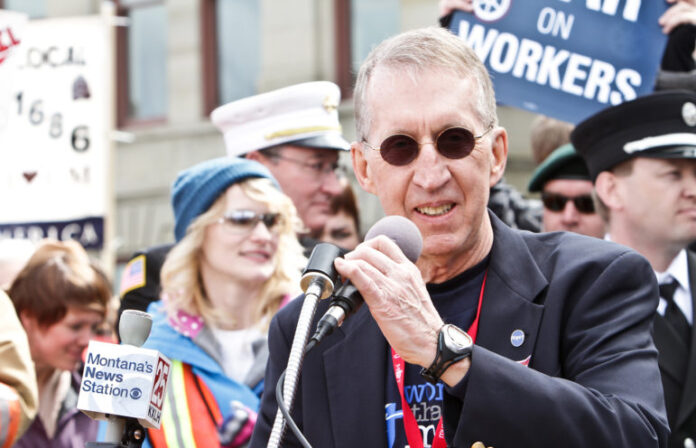 As one of the most influential political actors in the state, elected by and beholden only to his union’s members, Feaver helped shepherd the transformation of Montana’s labor movement through dozens of legislative sessions, the faltering of the movement’s traditional Democratic allies and the rise of anti-union animus in the Republican Party.

According to retired Montana AFL-CIO leader Jim Murry, another top union leader named by Lee newspapers in 1982 as the second-most-powerful man in the state, Feaver has been the “eight-hundred-pound gorilla in the labor movement.”

“With Eric’s retirement, it’s really an end of an era,” Murry said.

Raised in Oklahoma, Feaver was an international studies graduate student at Johns Hopkins University when he was drafted into the U.S. Army as a conscientious objector in 1968 at age 24 and sent to Vietnam as a combat medic.

He returned to D.C. after the war and headed west in 1974 when his wife got a job with the state auditor’s office in Helena. He had never been in a union before, but within a decade he was president of what under his watch became the state’s largest union.

Feaver’s introduction to the labor movement came quickly when he was hired to teach at Helena Junior High School (now Helena Middle School).

“A guy comes in and he lays a membership card in front of me and said, ‘folks around here join the Helena Education Association.’ And I said, well I want to do what folks do. So I joined.”

The Montana Legislature had just passed the 1973 Collective Bargaining Act for Public Employees, which was expanded the following session to include teachers. The National Labor Relations Act did not cover teachers, and full unionization for public-sector employees in Montana had not been allowed before the 1973 state law.

A wave of strikes in Montana school districts big and small followed as teachers established unions. Feaver had arrived in Montana just as public employees were beginning to collectively assert power.

“It was like I just fell into this position” as the movement took off, Feaver said.

The two unions, which grew to encompass public employees in many sectors, constantly raided each other for members, which Feaver saw as fruitless, since it didn’t grow the larger labor movement.

Feaver’s union counterpart, MFT President Jim McGarvey, agreed the rivalry was counterproductive. Beginning in 1994 the two unions began working together in partnership, culminating in the landmark merger into MEA-MFT in 2000. It was not easy.

“Merging with MFT was the most excruciating thing of all time,” Feaver said.

It started small, with the consolidation of some staff and communications work, as well as of local and state political agendas. In 1994 the two unions’ affiliates in Missoula successfully merged in a trial run for later statewide integration, forming the Merged Missoula Classified Employees Organization.

Affiliates in other states were attempting similar mergers, and union leadership began pushing for a merger on a national scale.

In 1998, NEA and AFT leadership agreed to a merger, but when the proposal was put before the 10,000 members of the NEA National Assembly, the deal failed to win a two-thirds majority, and died. Efforts to restart negotiations for a national merger have since failed to get off the ground.

While dissenting NEA members prevailed on the national level, that wasn’t the case in Montana, and when the national affiliates agreed to allow state-level mergers,  MEA-MFT was formed in 2000.

MFT had previously been in unsuccessful talks to merge with the Montana Public Employees Association, and Feaver said the creation of MEA-MFT set the table for MPEA to join as well.

“Once we made the decision to merge, it was rapid,” Feaver said, with the MEA-MFT and MPEA assemblies each passing resolutions in 2016 to explore a merger, voting in 2017 to do so, and officially merging in January 2018 as the Montana Federation of Public Employees.

MFPE today represents 25,000 public employees, making it the largest union in the state, and the largest voting bloc within the Montana AFL-CIO, accounting for half of the federation’s 50,000 members.

As public employee union strength in Montana grew, other state unions representing the trades, many of them private sector, had angled into a downward trajectory.

Montana’s union movement began in the mines of 19th century Butte, and by the turn of the century the city was known as the “Gibraltar” of labor unionism, according to Montana State University historian Jerry Calvert, due to the existence of unions strong enough to enforce closed shops in every major industry. Child labor laws, the 8-hour work day, and womens suffrage all came about in Montana with the help of union pressure.

In The Gibraltar: Socialism and Labor in Butte, Montana, 1895-1920, Calvert traced Montana’s labor battles, which included miners bombing their own union hall for insufficiently radical leadership, Anaconda Copper Mining Company thugs massacring union men in the street, and the U.S. Army’s occupation of Butte to keep copper flowing during World War I.

Deindustrialization beginning in the 1970s eroded craft union power, with job losses in mining, timber, refining, smelting and other industries that had long been union strongholds. Some jobs went overseas where labor was cheaper (and less organized), while others were lost to automation or the vagaries of international commodities pricing. Some jobs, like mining in Butte, returned, but without union shops.

“A lot of the old industrial unions no longer exist,” Murry said.

Membership in the unions that represented those workers declined with the well-paying jobs, and so too went the unions’ political muscle.

“Eric has had to deal with a change that we’ve seen not only here in Montana, but that we’ve seen nationally, with the decline in union membership, which really started in the ’70s,” Murry said. “We really felt the hemorrhage of membership.”

Without dues-paying members the labor movement has little power, but the growth of public-sector work that occurred parallel to deindustrialization ensured the movement would continue, though with a more white-collar composition. The consolidation of teachers unions created a more powerful bloc than de-populated individual unions could muster.

According to Murry, the MEA-MFT merger marked a sea change in Montana’s labor landscape, with public employees taking the dominant position over the weakened industrial trades.

Though closely associated with Montana Democrats due to the party’s pro-union stance, in 1996 MEA endorsed popular Republican Gov. Marc Racicot for a second term over the Democratic candidate, state Sen. Chet Blaylock, an MEA member who had served as a delegate to the state Constitutional Convention. It was the first time the union endorsed a Republican for governor.

Union members were insulted by the perceived betrayal, but when Blaylock died suddenly of a heart attack on the campaign trail two weeks before the election, the snub became a source of tragedy, with Blaylock’s widow telling the Associated Press it had been “a blow to the heart.”

Although it was the MEA board that voted to endorse Racicot, Feaver, as president, has carried the blame for the snub ever since, though he said the story is more complex than most people know.

According to Feaver, Racicot’s re-election was considered such a sure thing that no Democrat wanted to run against him just to lose. Before Blaylock entered the race and before the endorsement, a union poll showed 70% of members approved of Racicot’s job as governor. Racicot was fiscally conservative, but not anti-union, and at MEA’s urging had vetoed a bill passed by the newly Republican-dominated state Legislature the previous year that Feaver considered so onerous he said he threw up in the Capitol building when it passed.

“Step and lane” salary schedules provide teachers with raises for each year of teaching experience and for additional education, such as credits toward advanced degrees. The Montana Supreme Court had ruled in 1984 that steps and lanes in school district contracts remained in effect even during contract renegotiations, preventing districts from running out the clock to force teachers into worse deals. The bill Racicot vetoed would have allowed districts to unilaterally abrogate contracts and coerce teachers into losing pay and benefits.

“We were indebted to Racicot for that veto. Can one veto make a campaign? Sometimes yes, it could,” Feaver said, though he insists there was no quid pro quo to exchange the endorsement for the veto.

Feaver said MEA interviewed Racicot and chose to endorse him before Blaylock announced his candidacy in December. The endorsement was made public in January to the disappointment of many rank and file members, with local affiliates in Billings and Butte breaking with the statewide organization to endorse Blaylock.

Feaver didn’t want Blaylock to run (“He was very ill. He had a bad heart, he had cancer … ”) and said he tried to talk him out of it, saying the race would kill him.

The article was published at Eric Feaver and the changing of Montana’s labor guard.